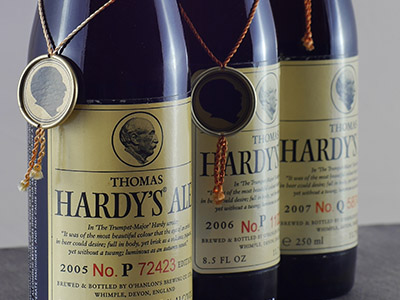 A barley wine, or an old ale? This is not as pedantic a question as it may appear. Thomas Hardy’s Ale is such an important beer that it can actually be classified in two different categories.

If the barley wine definition is perhaps the more common and widely-acknowledged, quite a few English experts put this beer in the old ale class. Foremost among these is celebrated beer writer Michael Jackson.

The distinction is one for the specialists, because the two categories do in fact have many points in common: neither, for example, could be described as a “mass” beer; moreover, both are characterised by a fairly high alcohol content, higher in barley wine than in old ale, and both have a pronounced malty flavour.

Both types, again, are of British origin and both have long histories. In fact, although the first recorded mention of barley wine dates to the early 20th century, we know for certain that this type of beer had already been produced in Great Britain for centuries. Old ales have an equally long story.

Both types, finally, are beers which develop and mature for years in the bottle, and so they can be aged in the cellar after purchase. This is why, with a beer like Thomas Hardy’s Ale, we can enjoy amazing “vertical” tasting of various vintages, discovering the differences in the beer’s flavour and aroma in each individual year.

A feature which has added to the reputation of the beers in question: buying barley wine or old ale is seen as an investment whose only reward is pleasure. On your own or shared with friends.

On condition, of course, that they know how to appreciate a Thomas Hardy’s Ale.