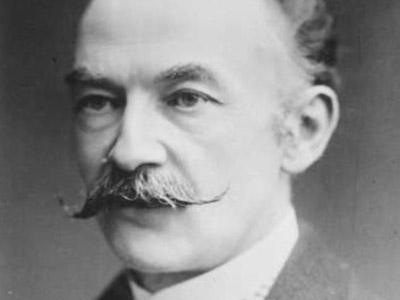 Thomas Hardy was one of the greatest English novelists and poets of the late 19th and early 20th century. He was born in 1840 in the small village of Upper Bockhampton, Dorset. Not so far from the small city of Dorchester, where the Eldridge Pope Brewery opened its doors in 1881. Following a period spent in London, where he intended to put to use his studies as an architect, Hardy returned to his home county and devoted himself to literature.

A socially committed writer, often gloomy and pessimistic, his fortunes fluctuated in both life and work, with noteworthy success often followed by vociferous public rejection. After an early series of short stories came what may be considered Hardy’s greatest novel: Far from the Madding Crowd. The success of this book, published in 1874, allowed Hardy to devote himself exclusively to writing, and, at the same time, to become increasingly isolated in the rural life of the Dorset countryside.

1891 saw the publication of the novel which is universally seen as his most famous:Tess of the d’Urbervilles. In a dramatic criticism of social mores, Tess, a young country girl, finds herself cast into a social setting superior to her own. Four years after the success of Tess came the publication of Jude the Obscure, which nevertheless did not receive critical acclaim. The disappointed Hardy vowed to write only poetry from that moment. A promise he kept until his death in Dorchester in 1928.

Thomas Hardy loved beer. Especially from the Eldridge Pope Brewery. He was frequently seen in Dorchester pubs, and in one of his stories, The Trumpet Major, he describes the beer of Casterbridge (aka Dorchester) in these words: “It was of the most beautiful colour that the eye of an artist in beer could desire: full in body, yet brisk as a volcano; piquant, yet without a twang; luminous as an autumn sunset; free from streakiness of taste, but, finally, rather heady. People adored it, and the well-to-do loved it better than wine…”

Years after the writer’s death, some empty Victorian bottles were found at Eldridge Pope. The decision was taken to pay homage to the great author, and in 1968, on the fortieth anniversary of his death, a special beer was produced for the first time, in limited edition. It was called, obviously, Thomas Hardy’s Ale.