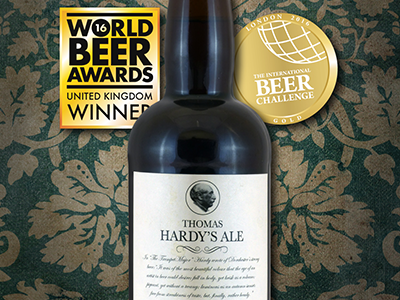 The prestigious World Beer Awards welcomed back Thomas Hardy’s Ale: the title of “Country Winner” in the Barley Wine style is proof that the 7-year interruption has not diminished this beer’s singularity – it’s “English” by vocation.

Thomas Hardy’s Ale is finally back in production and it has already added another seal to its rich, tormented and illustrious history. After the recent gold medal at the International Beer Challenge, the title of “United Kingdom Country Winner” awarded by the competition’s international jury to the Barley Wine as the best in the country is the confirmation that Thomas Hardy’s Ale is ready to pick up from where it left off.

After all, the label changed ownership in 2003 (and with that, a change of location for its team of workers and production) when the American importer George Saxon and O’Hanlon’s Brewery decided to resurrect the beer dedicated to the English poet and novelist produced by the Eldridge Pope Brewery from 1968 to 1999. Unfortunately, Saxon also was forced to throw in the towel in 2008 due to the high production costs of a beer that requires supervision, production time and the quality of prime materials that are far superior to those needed for the classic Lager beers.

But today there is a growing awareness on the part of public which is always on the lookout for quality, authentic stories and a flavour that goes beyond conventions. In this regard, Thomas Hardy’s Ale has admirers and collectors throughout the world thanks to its smooth yet complex body. The beer’s many subtle flavours make it difficult to describe in just a few words: notes of candied and brandied fruit, dried figs, fresh tobacco, chocolate, bitter orange marmalade, dried fruit and chestnut honey.

Another reason why it’s so well loved is because it ages very well. 25 years in the cellar perfects its structure and refines its aroma.

2 comments on “The best Barley Wine in the UK”